In order to sort out and to smoothly handle students’ related issues, ULK, via the Direction to Students Affairs and Customer Care, has adopted a participative approach by working in partnership with students. In addition to this partnership, there exist at ULK, activities related to social affairs such as cafeterias and the bookshops, which help students to satisfy their daily needs, on campus.

AGEULK is the university students general association, which was created in 1999 and whose mission consists into protecting the students’ interests by ensuring, promoting and safeguarding the academic, cultural and social interests as well as the welfare of its members. In conformity with the law n° 20 of October 20, 2005 regulating higher learning in Rwanda, ULK involves students in the daily management of the University at all levels. Classes Each class elects its representative, the deputy class representative as well as three (3) members who are part of the Board of representatives into the Students’ General Assembly. These do act as advisors into the class and collaborate closely with the academic authorities (art. 60 of the ULK Internal Regulations).

At the level of the department, students are represented by the class representative or his (her) nominee for concertation on eventual problems and/or for suggestions related to an effective management of academic affairs in their respective promotion, they also partake in different meetings organized at this level.

Students of each promotion of the School elect among them a representative from the department who participate into the School Council, which takes place once a month.

Students are represented in the academic senate by a representative from each School, who is elected by his colleagues among the representatives of each department. The commissioner in charge of academic affairs (into the Students Representative Committee) is also member of this board.

The chairman of AGEULK and the commissioner in charge of Gender promotion represent their colleagues in the Board of Directors of ULK, following the provisions of the law n° 20 of October 20, 2005 regulating higher learning in Rwanda.

In partnership with ULK, AGEULK is committed to serving the community via its different commissions. In addition to these services, students have opened up partnerships with other private universities and related institutions at the national, regional and international levels in order to strengthen culture and ethics learnt at ULK , an association of the ULK alumni is on its way of creation.

In collaboration with AGEULK and the Student General Association of the Genocide Survivors (AERG-ULK), ULK organizes visits in memorials of the Genocide Victims every year. Through the RWIGAMBA BALINDA FOUNDATION (FRB), ULK grants bursaries to needy students who couldn’t afford paying the academic fees in the course of the year, particularly students sponsored by the Fund for Assistance to the Genocide Survivors (FARG), who failed in class and thus become disqualified by FARG. Currently, the number of students who have benefited from the FRB assistance amounts to 1474. In order to facilitate students to complete fees for the whole academic year, ULK allows students to pay by instalments, this, on their request. Concerning social cases; death notably, ULK, in collaboration with AGEULK, organizes visits to families of students’ victims of misfortune and actively participate in the burial ceremonies. As a mean to reinforce social cohesion among students, associations for the promotion of culture, good governance, unity and reconciliation, Gender, fighting against HIV/AIDS, religious bodies … are put in place and encouraged.

In order to cater for students on a daily basis, ULK runs a cafeteria where students can buy food at a reasonable price, as compared to elsewhere. In the context of hygiene and health care, the Directorate to Students Affairs organizes daily inspections in the catering services of the cafeteria as a way to guarantee good heath for students. Stationary Shop For further serving students, ULK has organized a stationery service which also possesses photocopying machines for the course notes and other academic documents in order to prevent students from seeking these services elsewhere. Hygiene and Environment

In the strict observance of hygiene, all ULK premises are equipped with toilets and urinals at each floor. A daily inspection is conducted to this end.

Television sets are put at the disposal of students to access news during break time. Health Centre and Students’ risk insurance

In the perspective of students’ well-being and emergencies in case of sicknesses, ULK will organize a health care centre on behalf of its students and staff in a near future. Students’ hazard insurance on its side has already become operational since the academic year 2008.

The service in charge of psycho-social assistance and counselling to the ULK students and personnel has been established at ULK.

Below are the duties of the Director of Students Affairs and Customer Care:

• Planning, directing, coordinating and controlling all the activities related to the well-being and life quality of the ULK students
• Defining and formulating, in consultation with other services taken as a priority by the Students, the policy and strategies in matter of the students’ life quality, counselling, discipline, health, leisure and conflict management, to be submitted to the decision taking sphere and assuming the daily monitoring;
• Organizing, in collaboration with the deans of faculties or their representatives, the welcome programs (orientation and socialization) of new students;
• Looking forward to the observance of the Statute and rules, which regulate the students’ life;
• Supervising all the activities of the Committee of the students’ representatives (AGEULK);
• Looking forward to the rational utilization of the financial, material and human resources put at his disposal ;
• Looking forward to the observance of the students code of conduct and morality;
• Preparing for meetings organized by the hierarchy and for other meetings in which he represents his hierarchical authority;
• Carrying out any other related functions and any task requested by the hierarchy;
• Participating to the smooth running of the activities of the faculties;
• Supervising students’ activities relating to services to the community.

The Director of Students Affairs and Customer Care supports in all areas of the Enrollment, Management Offices, such as Admission, Registrar and Student Financial Services. The objectives of the customer service are to :

Sound and transparent management of an institution requires the combination of efforts from many actors, chiefly from privileged partners; namely students with regard to a learning institution. In this perspective, ULK has privileged partnership with students via AGEULK for the performance of its actions and the betterment of the quality of Education in all aspects. 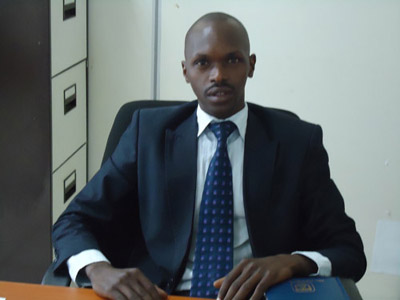