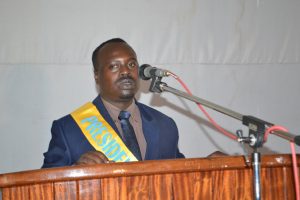 Given the fact that Rwandan intellectuals must shine in the midst of the population by combining science, conscience, strength and deeds to promote the human kind in general and the population in particular, we, students of Kigali Independent University, have created a Student General Association within the University.

The Association is a non-profit making one and is regulated by its statute on the basis of law n°20/2000 of June 26, 2000 relating to the application for and the obtaining of the legal status to Non-Profit Making Associations

II. GENERAL OBJECTIVES OF THE ASSOCIATION

AGEULK set up the following objectives:

• Gathering all the ULK students in one association so as to bring together ideas and pieces of advice;

• Making use of the know-how, technology, education and culture in contributing to the country’s development;

• Promoting and safeguarding the interests of the members of the Association;

• Representing ULK students at academic and administrative jurisdictions; the vice-chairman replaces the chairperson in case of absence or hindrance;

• Channeling constructive ideals and causing the members to become aware of the problems of the community.

III. PLACE OF ACTIVITIES, MEMBERS AND ORGANS OF THE ASSOCIATION

1. Association AGEULK operates in Rwanda; but also extends its activities beyond the country, on decision of the General Assembly
2. AGEULK is composed of effective members and honorary members:
o Every ULK student is an effective member;
o An honorary member is anyone who likes and supports AGEULK and who is approved by the Association General Assembly.
3. The following are the AGEULK organs:
• The General Assembly of the Association; the Executive Committee of AGEULK; the Consultative and Control Council; the College of the representatives of classes;

AGULK patrimony stems from: members’ contributions; subsidies from ULK and other institutions; from income generating projects as activities by the Association; from Rwandan Government, etc.