Language Candidates get their Certificates from the ULK Centre of Languages 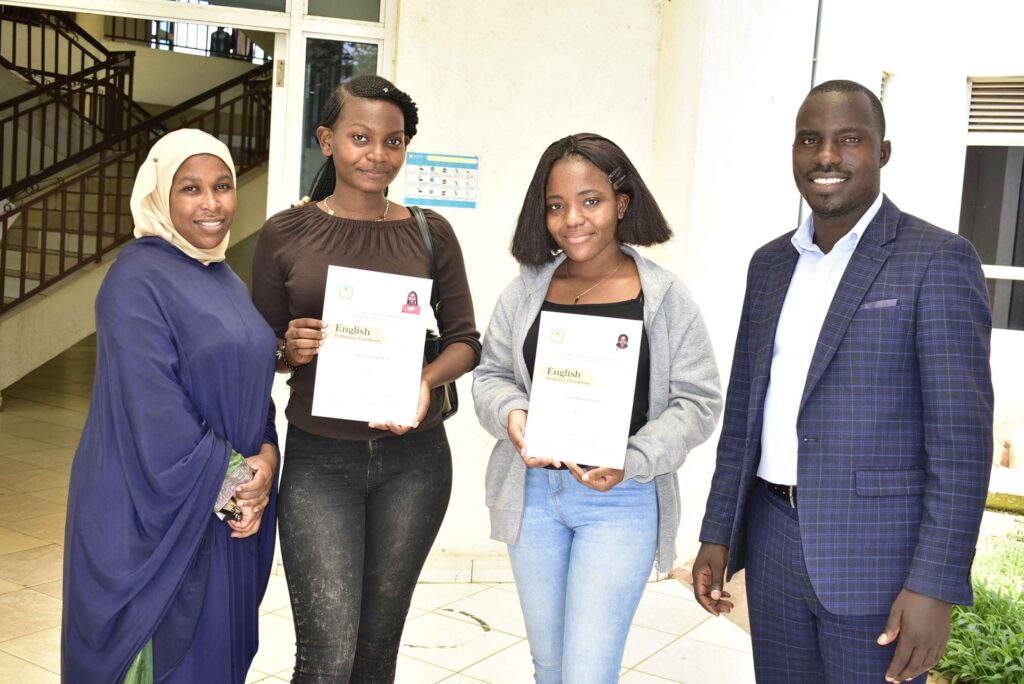 On 15th February 2022, the ULK Centre of Languages (CELA) awarded certificates of completion to candidates who successfully completed a four-month intensive course of English.

Historically, the centre was established the very year the University opened doors. It has ever since been mandated with the enhancement of the use of languages among students and the campus community at large.

However, until a few months ago, the Centre was organizing normal English classes in every class to teach English language as a subject that will be assessed and mentioned on the student’s academic transcript. Given the market demand where English language is perceived as a leading tool in the business world, suggestions were made to upgrade services offered by the centre and start offering short courses open to the general public. In other words, these short courses can benefit anyone interested in improving their communicative skills not necessarily being a registered ULK student.

Currently the centre receives businessmen and other members of the human family who need to learn English and other languages for different purposes including those involved in local and international businesses or those aspiring to be travelling across the globe. Besides, the Centre accommodates a number of international students from French speaking countries who come to Rwanda for their education. Doing their preferred majors in English yet they did their previous academic levels in French, is a tall order for them. Given this, they have found CELA an opportunity for them to know English, the medium of instruction in Rwandan schools.

It is against the above background that seven (7) candidates completed their short course of English in the Centre of Languages and they were all awarded their certificates bearing the marks they scored in the end of training test. As it was realized, the majority performed well and this is a testimony that the centre meets their expectations in the four language skills (listening, speaking, reading and writing).

The Director of CELA, Mr. Jean Baptiste MANIRAKIZA expressed his satisfaction vis-à-vis the performance of the candidates and requested them to keep on using English in their day to day lives so as to make a greater impact.

“As we always told you, effective mastery of a language requires using it oftentimes so as to acquire new vocabulary as you speak with other people. Therefore, I’d like to remind you about this noble determination of using English language to better stand tall in the English speaking world”, he told the students.

Speaking at the function, Lecturer UWERA Sauda, who also teaches English, thanked the students and reminded them that completing their short course of English should not deter them from setting other goals. She told them that they can find this completion as an opportunity that opens other doors.

“We’ve trained you to make a difference in the world of speakers of English. Such a difference should go beyond Rwanda as a country you were trained in to impact the entire globe. You can in turn become teachers of English and make a living out of the courses you will be teaching. So, grasp this opportunity and take advantage of it”, she told them.

It is worth noting that ULK aspires to teach all languages that people might develop an interest in. In this respect, languages such as French, Chinese, Spanish, Swahili, Kinyarwanda, and many others are scheduled to be taught once the required quorum enrols for them.