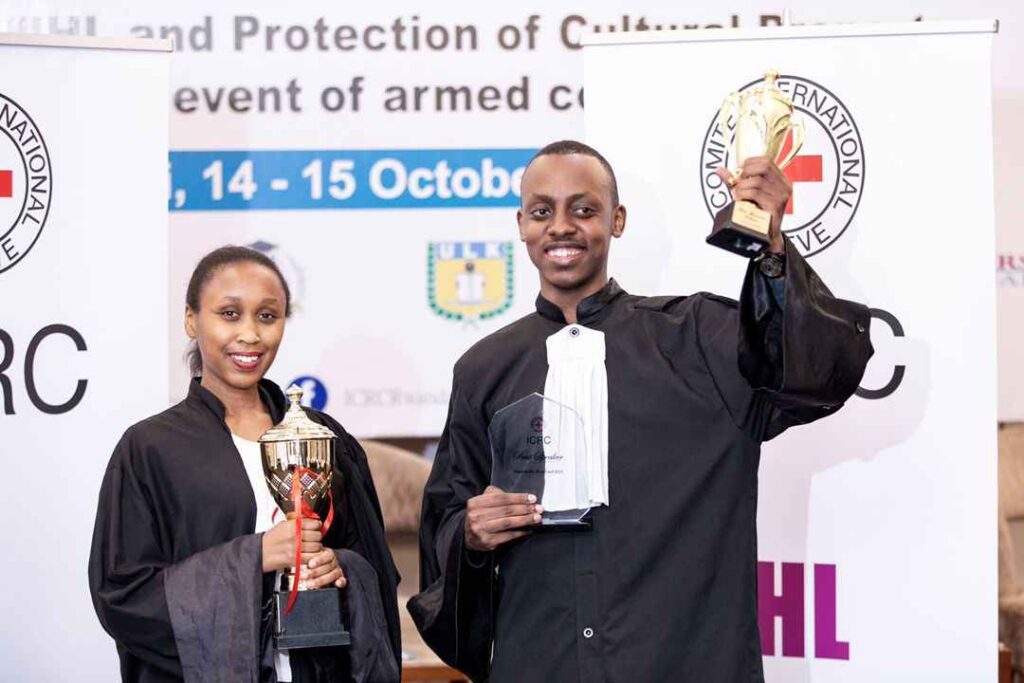 On 15 October 2021, Kigali Independent University ULK represented by its law students, Samuel Ngoga and Denise Isimbi won the 5th edition of National Moot Court competition organized by the International Committee of the Red Cross. The move to be crowned champions came after ULK had knocked out other universities offering law courses in Rwanda, namely, the University of Rwanda, University of Kigali, UNILAK and INES Ruhengeri.

Moot Court is a competition that takes place annually with constants taking turns to prosecute and defend before judges after a subject matter has been announced. Besides, professional judges are the ones who adjudicate the contest to determine the winner based on how skilled and informed the party has proven to be.

Shortly after the disclosure of the results, Ngoga Samuel shared his feelings and said that taking part in such a competition is an opportunity worth grasping as lawyers.

“If there is anything that made me feel being on top of the world, it is this competition; not only because we’ve won it, but also because it equips us as lawyers with more skills on international law”, he enthusiastically said.

The spirit of winning prizes and striving for invincibility is something that has been nurtured at Kigali independent University and ULK Polytechnic Institute as some years back, the academic institutions have on a number of occasions won several contests.

Nkundukozera Emmanuel who was with the students as they rolled up sleeves in the Moot Court competition thanked the students and attributed the win to the efforts the university puts in sharpening students minds through the availability of quality resources and teaching staff.

The head of ICRC delegation in Rwanda, Yann Fridez underscored that the competition aims among other objectives to raise people’s awareness on the significance of International Humanitarian Law which seeks to protect humanity during war periods. Winning this competition earned ULK students ticket for the continental contest due in Kenya in the days lying ahead.