The new ULK Guild Council takes oath of the office 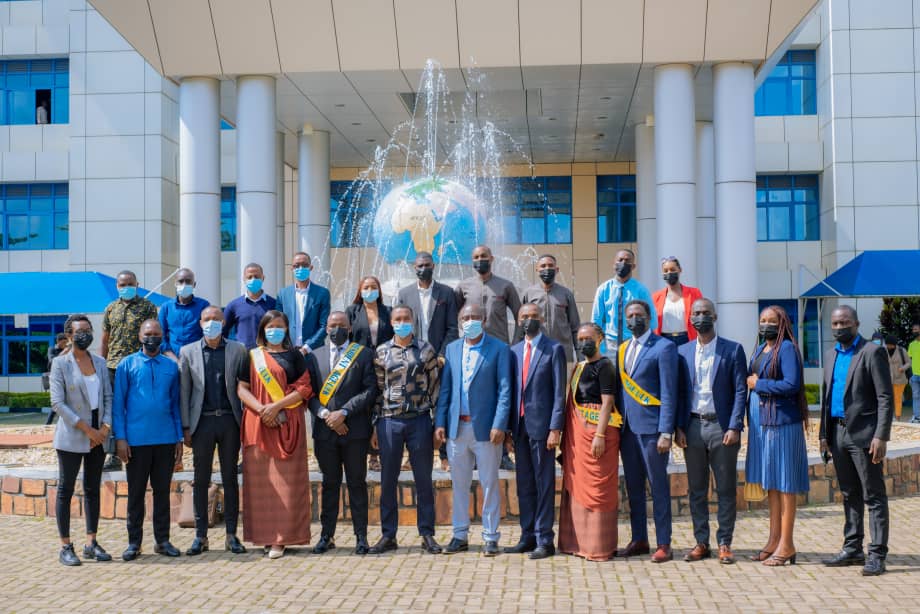 On 4th March 2022, the new AGEULK Guild Council took the oath of the office a few days after they were elected. It was an event that was attended by people from all walks of life including the Vice Chancellor of Kigali Independent University ULK, Dr. RUSIBANA Claude, the Principal of ULK Polytechnic Institute, Dr. SUMBIRI Djuma, ULK staff, representatives from higher learning institutions in Rwanda, and ULK students.

The Guild Council is made up of the Executive Committee, ministers and representatives of schools. During the oath taking session, everyone pledged to work industriously to make Kigali Independent University and ULK Polytechnic Institute rank top among higher learning institutions operating in Rwanda and beyond.

In his welcome remarks, Dr. SUMBIRI Djuma, the Principal of ULK Polytechnic Institute, commended the new Guild Council committee for the confidence and courage to lead the students’ union throughout 2022. He also tasked the new committee to move earth and heaven to put their Alma Mater on the map using social networks.

“But most importantly, let me assign you a task. Strive to digitally put your fellow students together by creating a platform where you discuss ideas that contribute to the advancement of your University even after you have graduated. We need you for instance to make sure that all the students follow all ULK social networks including Facebook, Twitter, Youtube Channel, Snapchat, ….”, he appealed to them.

As ULK is home to a considerable number of international students, some of them have managed to scoop some slots in the new committee. With this inclusivity ULK will undoubtedly go extra mile. With different cultures, this is likely to spice up the Guild Council with more ideas that will in turn impact positively on the agenda of both Kigali Independent University and ULK Polytechnic Institute.

Speaking on behalf of the Guild Council, Mr. MURWANASHYAKA Evariste, who was re-elected as the Guild President, said that ULK taught them to be endowed with ethical values as weapons of being successful and making a difference in the world. He said this while quoting a saying by Martin Luther King Jr.

“The function of education, therefore, is to teach one to think intensively and to think critically. Intelligence plus character is the goal of true education. This is what ULK taught us day to day and it helps us to get leadership values”, underscored.

Higher learning institutions find their tasks lighter through Guild Councils as the latter are closer to students and they address all petty problems which do not require the intervention of senior university officials. Similarly, these councils act as bridges between students and senior officials.

In his closing remarks, Dr. RUSIBANA Claude, the Vice Chancellor of Kigali Independent University ULK, told the new committee that elections do not entail one’s ability to lead. To this he requested them to roll up sleeves and serve those who elected them exceptionally.

“Being elected is one but taking responsibilities is another big assignment. You must determine yourselves to serve your fellows and everything you do should be governed by humility as a good leader is humble”, he advised them.